Currently the storm is located 115 miles west southwest of Brava, moving west northwest at 15 miles per hour away from the Cape Verde Islands. Maximum sustained winds have reached 40 miles per hour.

Some storm strengthening is expected over the next few days, with tropical storm force winds extending outward from the center of the storm up to 35 miles. Early next week Erin may reach dry, stable air that could lead to weakening. The storm is not expected to reach land as Erin moves away from Africa into the central Atlantic, however forecasters say it is much too early to tell if Erin will reach lands farther west. 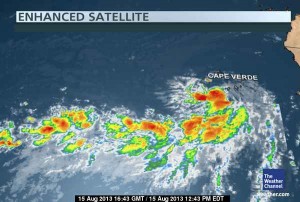