What is a Hurricane

From June 1 to November 30, weather experts urge coastal residencies to be aware of the dangers during hurricane season. Sweeping the coasts of lands and wreaking havoc upon even the most developed cities, hurricanes have gained fame as some of the most destructive forces of mother nature. But, what exactly are hurricanes? Put plainly, a hurricane is a massive storm or “tropical cyclone” developed and maintained by strong winds of  74 miles per hour or more.

How are Hurricanes Formed? 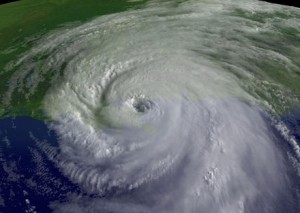 The formation of a hurricane begins in the tropics (including the Gulf of Mexico, the Caribbean and parts of the eastern North Pacific and North Atlantic Oceans)  where the water temperature is no less than 80°F. Low pressure above the surface of the water cause winds to circulate rapidly, accumulating clouds of moisture and precipitation. Bands of condensed moisture and heat spin quickly around the center of a hurricane, known as “the eye”, which is characterized by mild winds and and a circular shape.

This activity sustains a drop in pressure which supports the growth and enlargement of the hurricane. As winds pick up speed, more heat is created within the storm accounting for a extremely powerful force.

What Types of Hurricanes Are There?

Meteorologists classify hurricanes by category according to the speed of winds within the storm. These levels are based on the Saffir-Simpson hurricane wind scale listed as follows:

Although higher category hurricanes leave much more ruin and damage, all hurricanes are a threat to our habitats. Persons living in hurricane-prone areas (see “Top Ten Most Hurricane Prone States” article) should be aware of the risks and prepare for these disasters. Hurricanes result in the injury and even death of many victims which may be caused by flooding, injury from debris, or other threatening situations.