Tropical Storm Henriette is located 1,290 miles west southwest of the southern tip of Baja California. This storm began forming behind Gil as early as Saturday morning, yet was only recently strong enough to be determined a tropical storm. Currently the storm has reached maximum sustained winds of 40 miles per hour, moving due west at 9 miles per hour.

Henriette has not prompted officials to place any coastal warnings or watches for either California or Hawaii. The storm is expected to turn west northwest as early as Monday, and may continue to strengthen early into the week of August 5 however it isn’t expected to reach hurricane status due to its travel over cooler water. Tropical storm force winds extend from the center up to 60 miles. 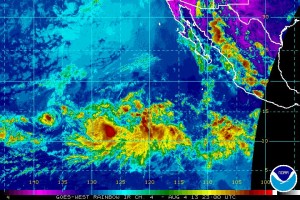