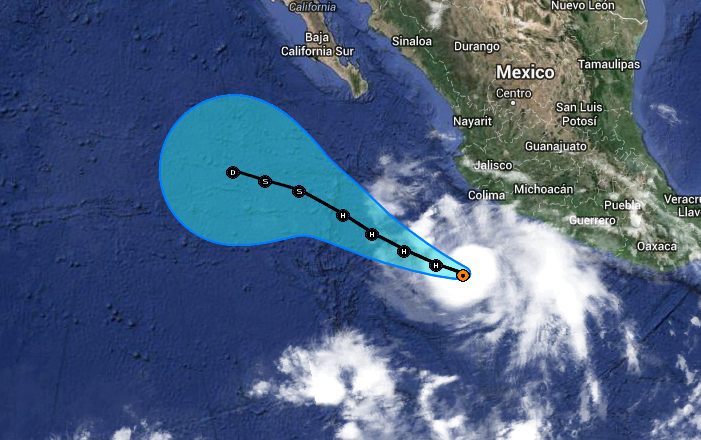 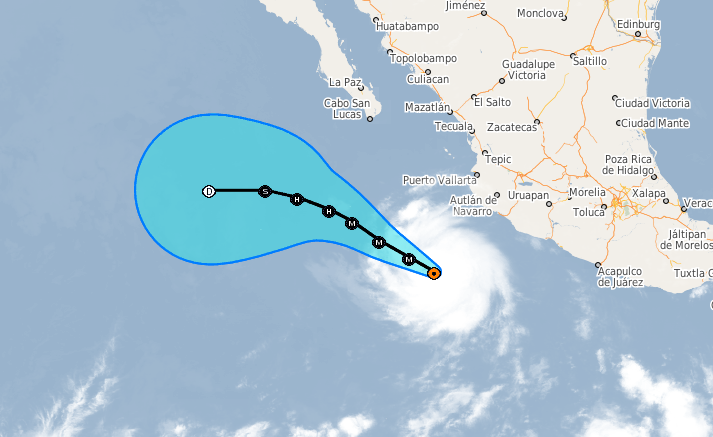 No current storm in NHC Eastern North Pacific Wallet 3
Posted on Thursday May 19, 2022

Cristina weakened as it approached Socorro Island to a Category 1 Hurricane, and continued to weaken further after it passed the island reverting back to tropical storm status. As she moves further northwest at 6 miles per hour, she will weaken even further and turn more west overnight.

Wind gusts have decreased to 70 miles per hour, and the Mexican Naval  Weather Station on Socorro Island still reports that wind gusts are around 45 miles per hour near or around the island. Forecasters predict that the storm will weaken to a remnant low as early as tomorrow.

Surf swells from Cristina are still affecting some areas of the southwestern coast of Mexico, but will diminish throughout that day. Some swells may affect the southern top of the Baja California Peninsula but will diminish by Sunday.

Hurricane Cristina has rapidly increased to a Category 4 hurricane, much faster than forecasters had originally predicted. The storm is currently moving west-northwest (away from the Mexican coast) at 8 miles per hour with winds reaching 150 miles per hour. She is expected to continue this route through Saturday, June 14. Although Cristina may weaken overnight, she can remain a major hurricane throughout Friday.

No land warnings or hazards have been placed for the Mexican coast, however residents are warned of the dangerous surf swells created by the storm. Return for more updates on the storm.

The second hurricane of the eastern pacific hurricane season has arrived. Hurricane Cristina, formerly Tropical Storm Cristina, formed just southwest of the Pacific coast of Mexico. Although the storm has increased in strength to a category 1 hurricane overnight, authorities predict Cristina will not make landfall.

The storm will continue west at 6 miles per hour, with winds reaching 80 miles per hour and increasing over the next few days. Forecasters predict that by Thursday, June 11, Cristina will take a turn toward the west-northwest with an increase in speed. Due to the storm’s location in warm waters, experts say that within the next two days the storm has a very high chance of increasing in intensity- more intense than previously predicted. Over the next 3-4 days, Cristina will reach cooler waters and weaken rapidly.

Are you prepared? Learn tips and tricks to help you get ready for this hurricane season.

Because Cristina is still currently 240 miles off the coast, the hurricane-force winds that extend 15 miles and the tropical-storm-force winds that extend 80 miles will fortunately not reach those along the coast. However, the swells created by Hurricane Cristina may affect areas of the southwestern coast of Mexico, potentially threatening lives with dangerous surf and rip currents.

Return to National-Hurricane-Center.org for the latest updates on Hurricane Cristina!