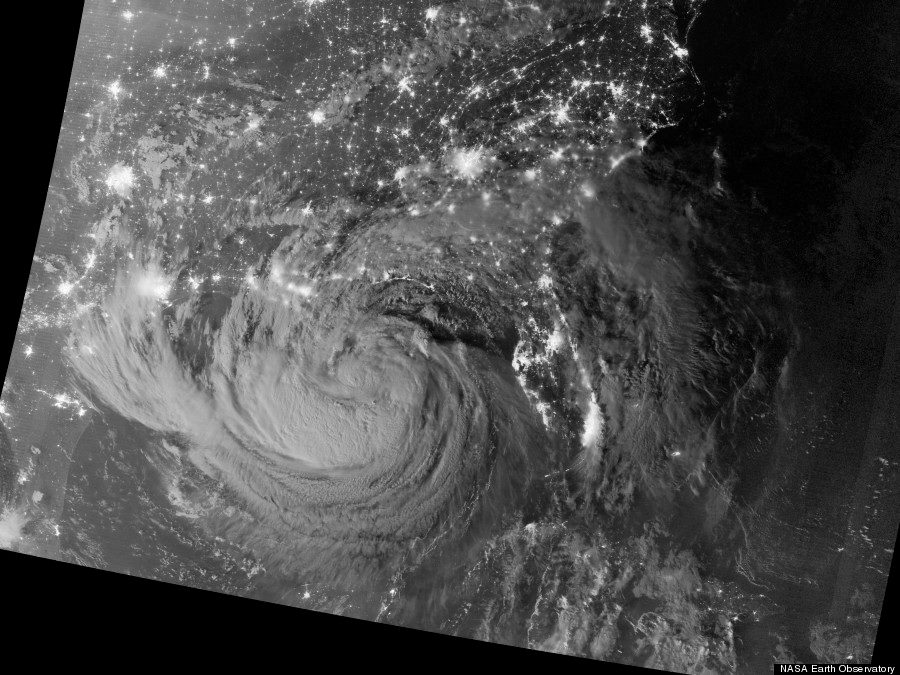 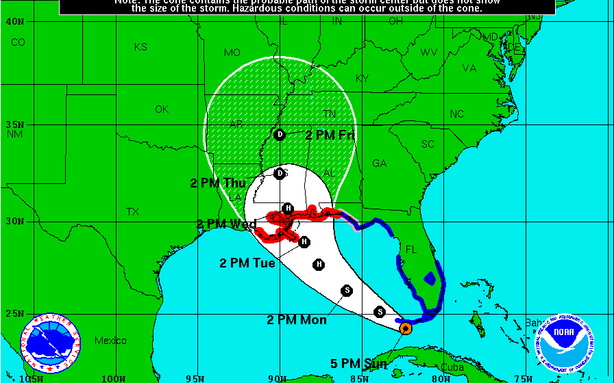 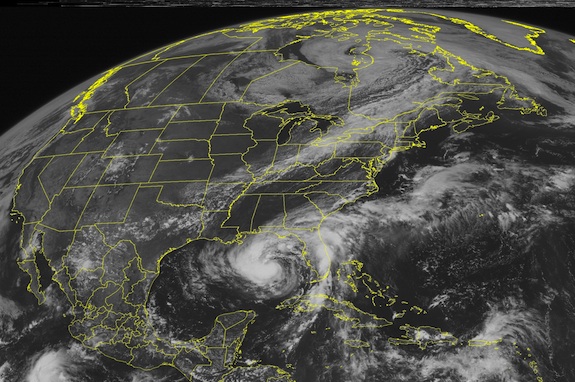 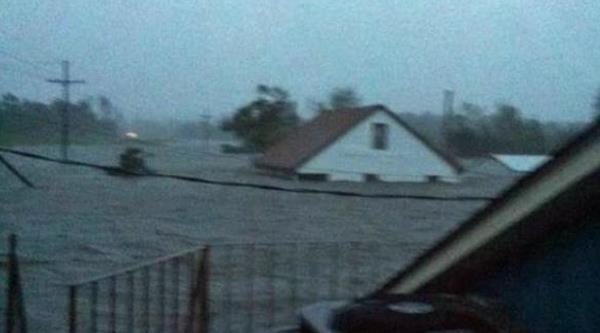 Offshore Waters Forecast for the Gulf of Mexico

.SYNOPSIS...High pressure over the northeast Gulf will shift
eastward through Fri, as low pressure develops south of the area
over Central America. This pattern will allow an area of moderate
to fresh southeast winds over the western Gulf to expand eastward
across the Gulf by late Fri. Winds and seas will then diminish
slightly across most of the basin Sun through early next week as
the pressure gradient relaxes, leaving only pulses of fresh to
occasionally strong winds at night off the northern and western
Yucatan Peninsula.

CHAUVIN, La. (AP) — Isaac became a hurricane August 28, 2012 capable of flooding the coasts of four states with storm surge and heavy rains on its way to New Orleans, where residents hunkered down behind levees fortified after Katrina struck seven years ago this week.

Shelters were open for those who chose to stay or missed the chance to get away before the outer bands of the large storm blow ashore ahead of a forecast landfall in southeast Louisiana on Tuesday night or early Wednesday. However, with the exception of some low-lying areas, officials had not ordered mass evacuations.

The U.S. National Hurricane Center in Miami said Isaac became a Category 1 hurricane Tuesday with winds of 75 mph. It could get stronger by the time it’s expected to reach the swampy coast of southeast Louisiana.

In Houma, a city southwest of New Orleans, people filled a municipal auditorium-turned-shelter. However, in the bayou country of Terrebonne Parish off Highway 24, storms pose a perennial dilemma for those living a hardscrabble life.

While some of the homes along Bayou Terrebonne and other nearby waterways show signs of affluence, this section of Louisiana 24 is mostly lined with trailer homes or small, often run-down houses. Staying could be dangerous, but many here who could be in harm’s way have nowhere to go and little money to get there, especially given the high price of gasoline.

Monica Boudreaux lives in a trailer on low-lying land but was talking Tuesday morning with a cousin who lived closer to the bayou. They and two friends chatted as the storm approached. Boudreaux laughed when asked what she’ll do if the storm hits.

“I’m surrounded by all family,” she said, referring to her friends as well as her cousin. “I’ll just pick up my little fat feet and run, I guess.”

The Coast Guard was searching the Gulf of Mexico near the Florida-Alabama state line Tuesday for a man who failed to return home from a water-scooter trip as Isaac was approaching the coast. The search began after the man’s wife called the Pensacola, Fla., station about 8:45 p.m. Monday, Chief Petty Officer Bobby Nash says.

Forecasters warned that Isaac was a large storm whose effects could reach out 200 miles from its center. Water may be worse than wind because the storm could push walls of water while dumping rain to flood the low-lying coast in Louisiana, Mississippi, Alabama and the Florida Panhandle.

So far, the main damage in the United States was political: Republicans cut one day off their presidential nominating convention in Tampa in case the storm struck there, though in the end it bypassed the bayside city. Isaac is also testing elected officials along the Gulf from governors on down to show they’re prepared for an emergency response.

Isaac’s track is forecast to bring it to New Orleans seven years after Katrina hit as a much stronger storm on Aug. 29, 2005.

This time, federal officials say the updated levees around the city are equipped to handle storms stronger than Isaac. The Army Corps of Engineers was given about $14 billion to improve flood defenses, and most of the work has been completed. The levees surrounding New Orleans are designed to withstand far more than the forecast 12-foot surge. And the city’s flood control system can pump out an inch of water per hour for the first hour, and a half-inch of water each hour after that.

But with landfall expected near the Katrina anniversary, anxiety was high, especially in the Lower 9th Ward, wiped out by Katrina after floodwalls burst and let the waters rush in.

“I don’t really trust the levees,” said Robert Washington, who planned to evacuate along with his wife and five children. “I don’t want to take that chance. I saw how it looked after Katrina back here.”

He leaned over the banister of his porch railing and looked out onto empty lots where houses stood before Katrina. His neighborhood, just a few blocks away from where the floodwall protecting the Lower 9th Ward broke open, remains largely empty.

Farther away on the Alabama coast, Isaac had begun pelting the shore with intermittent downpours Tuesday morning — one moment it was dry, and the next brought rain blowing sideways in a strong breeze. Gov. Robert Bentley lifted mandatory evacuation orders for low-lying coastal areas but encouraged residents to remain vigilant nonetheless.

The boardwalk at the tourist town of Gulf Shores was virtually deserted except for John McCombs, who ventured out to see waves lapping at the seawall at the public beach.

Within moments he was drenched and running for cover as a band of rain hit the wooden walkway.

“That’s it. It’s here,” he said, scurrying back across the street.

One question haunting locals is how much oil left over from the Gulf oil spill in 2010 might wind up on the beaches because of Isaac. Experts believe large tar mats lie submerged just off the coast, but no one knows where they are or how many might be in the Gulf.

Isaac was centered about 75 miles south-southeast of the mouth of the Mississippi River at midday and was moving northwest at 10 mph, according to the National Hurricane Center in Miami. It was 160 miles southeast of New Orleans.

Although Isaac’s approach on the eve of the Katrina anniversary invited comparisons, the storm is nowhere near as powerful as Katrina was when it struck. Katrina at one point reached Category 5 status with winds of more than 157 mph, and made landfall as a Category 3 storm.

Still, forecasters at the National Hurricane Center warned that Isaac, especially if it strikes at high tide, could cause storm surges of up to 12 feet along the coasts of southeast Louisiana and Mississippi and up to 6 feet as far away as the Florida Panhandle.

Rain from the storm could total up to 14 inches, with some isolated areas getting as much as 20 inches, along the coast from southeast Louisiana to the extreme western end of the Florida Panhandle.

On Tuesday morning, there were few signs on New Orleans’ famed Canal Street that a hurricane was imminent. A group of apparently intoxicated tourists asked 30-year-old Adrian Thomas to snap their photo as he scanned the headlines of The Times-Picayune in a newspaper box.

Thomas said he was waiting for his father to wire him money so he could leave for his hometown of Greenville, Miss., which is along the Mississippi River more than 200 miles from the coast. However, he said he might not make it out in time — and he was just fine with that.

In Mississippi, beachfront casinos were shutting down late Tuesday morning as a beach road flooded and residents hurried to shelters. Coastal residents Charlotte Timmons and Brenda Batey said they planned to stay put unless Isaac took a more menacing turn, believing it wouldn’t cause the devastation of some past storms.

Since Katrina, people have a more cautious attitude toward tropical weather, perhaps so cautious that there’s a danger of complacency setting in after near misses, Timmons said.

“It’s like crying wolf,” said Timmons, a 63-year-old retired media manager. “If they make such a big deal and start moving people out (too soon) and then it fizzles, people might not leave the next time.”