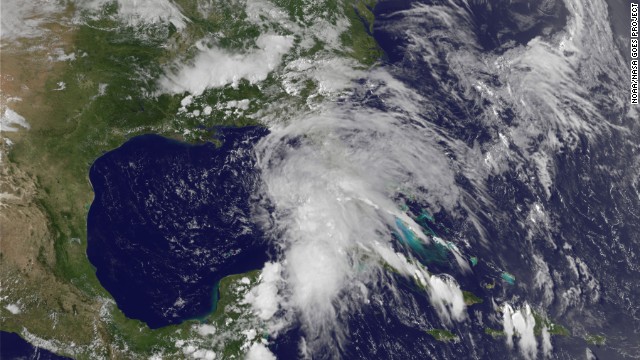 On Wednesday, June 5th, warm waters in the Gulf of Mexico began brewing the first named tropical storm of the 2013 hurricane season in the Atlantic, Tropical Storm Andrea. According to reports from the National Hurricane Center in Miami at 6:00 PM ET, Andrea boastssustained wind speeds of 40 mph while creeping towards Florida at 3 mph. Meteorologists located Tropical Storm Andrea at 392 miles southeast of New Orleans.

Andrea should make landfall along the shores of the Florida Big Bend between Thursday afternoon and evening. The storm is not predicted to develop into a hurricane.

However, Floridians can expect heavy rainfall and strong winds accompanied by severe thunderstormscausing rough seas by Thursday evening. Meteorologists do not foresee winds to be hazardous; nevertheless, flooding related to the storm may be a threat. Officials have issued a Tropical Storm Watch for regions between Flagler Beach, Florida to Surf City, North Carolina.

Forecasts indicate that Tropical Storm Andrea will be heading in a northeastward motion that will increase in speed on Thursday and Friday. This track will put southeast Georgia and eastern South Carolina directly in the path of Andrea around the late hours of Thursday and early Friday.