Tropical Storm Fernand forms rapidly in the Bay of Campeche in the southwestern Gulf of Mexico, late Sunday, August 25. The storm was previously Tropical Depression Six, but was upgraded in status after maximum sustained winds reached 45 miles per hour.

Currently the storm is located 25 miles east of Veracruz, Mexico and is moving west at 12 miles per hour. The Mexican government issued a tropical storm warning for the coast from Veracruz to Tampico earlier Sunday. Cities within this area, including Veracruz, Hidalgo, Northern Puebla, Southern Tamaulipas and eastern San Luis Potosi can expect 4 to 8 inches of rain, with possible isolated areas of 12 inches of rain, causing flash floods and mud slides, throughout Monday, August 26.

As the storm disintegrates over the next few days, heavy rain will still be expected throughout Tuesday as west as the Sierra Madre Oriental. 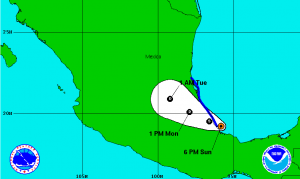