Ivo has reached maximum sustained winds 40 miles per hour with gradual strengthening expected within the next 3 days but is not expected to strengthen enough to become a hurricane. The storm is moving north at 6 miles per hour, with a north-northwest turn and increased forward speed expected over the next few days.

Because the storm is moving northward, just west of Mexico and the United States, Ivo is not expected to negatively impact land on a large scale, however heavy rainfall within the southern United States is expected either late weekend or early next week. The center of Ivo may weaken to a tropical depression or remnant area of low pressure through the weekend, but what’s left of the storm may turn into heavy rain and flash floods for areas like Phoenix and Las Vegas.

No coastal warnings or watches have been placed, but a tropical storm warning or watch may be placed on the southern Baja California Peninsula later today, Friday, August 23. Ivo may produce dangerous surf swells and as much as 3 inches of rain across this area.

Tropical storm force winds extend outward from the center of the storm up to 175 miles. 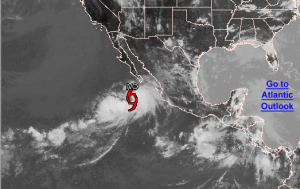