Posted by JudyR on July 25, 2013 in Hurricane Awareness | Comments Off on State Farm Under Fire for Hurricane Insurance Claims

In late 2012 State Farm was brought under fire in relation to a mismanagement of thousands of hurricane claims from Hurricane Ike in Texas. Released communications between State Farm managers in Texas spurred the investigation, and customers have claimed that State Farm has defrauded them out of owed money. 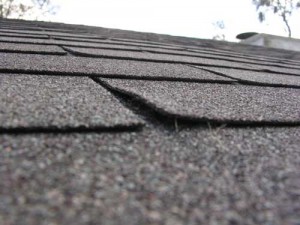 This is an example of lifted shingle damage which can occur when strong winds break the seal on roof shingles causing tearing but shingles are not completely removed.

The investigation is being led by Gregg Cox, head of the public integrity unit of the Travis County District Attorney’s office in Austin. Around 300 individual lawsuits center around State Farm’s mishandling of “lifted shingle” damage during Hurricane Ike, however the investigation isn’t confirmed to be related to these lawsuits.

The controversy around State Farm stems from the alleged cover-up regarding the fact that the company initially denied lifted shingle claims for homeowners in the Gulf Coast and then later switched stances. So many of the insured had claims denied that an investigation by the Texas Department of Insurance was launched.

As many as 100,000 policy holders are part of a class-action lawsuit against State Farm regarding denied policies, on top of the 300 individual lawsuits. The cover-up involves responses to policyholders’ damage claims which was altered to benefit the company’s interests in not covering lifted shingle roof damage.

A State Farm customer recently spoke out against the company for their alleged attempt at escaping payment to policyholders. Jim Warner has been with the company for over 20 years and says that he believed his policy covered any roof damage. Having never filed an insurance claim, Warner was shocked to discover that his claim was denied. Warner eventually filed a lawsuit against State Farm stating that internally released documents show intentional denying of roof claims after Hurricane Ike.

After an independent adjuster recommended a full roof replacement, Warner went to his insurance company for help but State Farm vehemently denied that the lifted roof shingles were not covered under his homeowner’s policy. With this information Warner filed a consumer complaint with the Texas Department of Insurance saying that more people were likely to have been denied for the same reason.

Texas state Senator Rodney Ellis is also at the forefront on the fight against State Farm and has tried to convince the Texas insurance commissioner to investigate State Farm further, and to also investigate other insurance companies who possibly may be denying similar damage claims including the Texas Windstorm Insurance Agency.

State Farm, who were served grand jury subpoenas in September, continues to deny any wrong doing and is fully cooperating with all current investigations. It says it has payed policyholders $1.5 billion which went to repairing roofs and wants to resolve all policyholders claims.

After, State Farm increased homeowner’s insurance premiums by an average 20% due to the higher number of claims the company has received as well as an increase in roofing prices.