Posted by JudyR on July 1, 2013 in Hurricane Awareness | Comments Off on TWIA Reform Bills 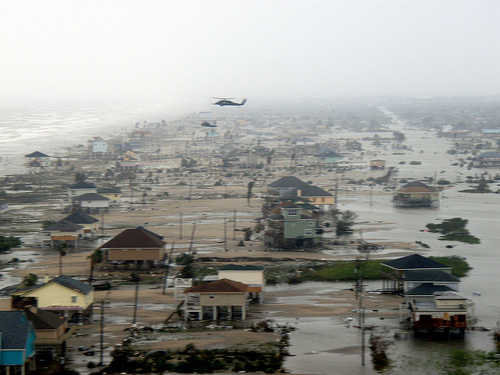 As of June 2013, two bills regarding the Texas Windstorm Insurance Association (TWIA) passed in the Texas legislature.

Representative Dennis Bonnen and Representative Greg Bonnen of Angleton authored House Bill 3007 in efforts to eradicate any confusion regarding structural modifications to homes by removing the Alternative Eligibility Certification program and any WPI-12 certification requirements.

The WPI-12 program was created in 2011 as a substitute for some wind and hailstorm policies that needed coverage through TWIA after being dropped by other private carriers. Over 20,000 policies require that homeowners make replacements in order to keep their existing coverage. The program was initially opposed due to the major expenses it would cause to homeowners just to maintain their policies.

Dennis Bonnen says that his bill will eliminate the requirement for expensive and burdensome modifications to continue TWIA coverage.

A companion bill, Senate Bill 1702, authored by Senator Larry Taylor, also passed through the Senate and the House with some amendments attached. 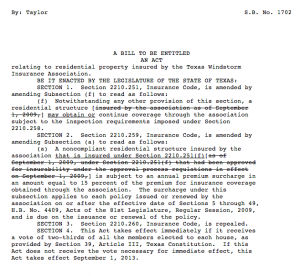 SB 1702 extends the alternative certification program of the TWIA by 2 years and removes the requirement that homeowners need to replace items such as roofs, siding, doors and windows in order to keep their coverage intact. The bill also will allow the TWIA to insure any residential structure that lost its wind and hailstorm coverage after June 2009. Those still in the TWIA’s program will continue to pay a 15% premium surcharge on their existing policies.

The amendments to the bill include extending the window to Dec. 2015 and a cap of $250,000 on coverage over noncertified homes starting in 2016 (which was later reverted).

Both bills offer relief from the requirements of the Texas Department of Insurance, including using approved materials for home modifications and having any and all home modifications inspected by a certified Windstorm inspector. They also aim to change the policies requiring coastal homeowners to make changes to their home in order to meet specifications.

The SB 1702, sponsored in the House by Bonnen, will undergo a final reading before its sent Gov. Rick Perry for a signature.