A tropical storm off the Pacific coast of Mexico threatens those within the area.

Tropical Storm Dalila is heading northwest, 175 miles south of the town of Manzanillo. Officials have stated that the storm has strengthened, producing maximum sustained winds of 45 mph.

The storm, moving at a speed of 10 mph, is expected to strengthen even more within the next 48 hours. A tropical storm warning was placed for the areas along the southwest coast of Mexico including Punta San Telmo to La Fortuna. A tropical storm watch was placed on the areas stretching from just north of La Fortuna to Cabo Corrientes. These areas should expect storm conditions through Tuesday, July 2.

Forecasters are predicting that Dalila’s effects will reach the coast by Monday morning with 1-3 inches of rain in some areas. The storm will stay heading northwest through Monday, then slow down and turn west-northwest on Tuesday. 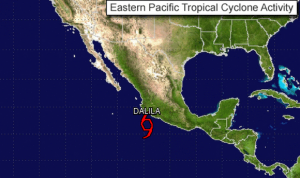