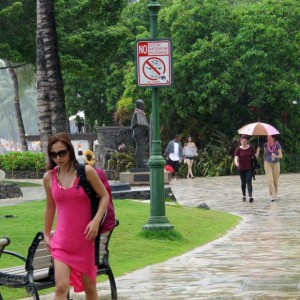 Tropical Storm Flossie, the sixth named storm of the eastern Pacific hurricane season, formed just over 1,000 miles west-southwest of the southern tip of Mexico’s Baja California Wednesday, July 24, 2013. It is the first tropical system to impact Hawaii since 1992.

The storm rolled through Hawaii Monday and early Tuesday dissipated, leaving little damage. Flossie weakened quickly on its eastern approach to the Hawaiian Islands. The storm’s downgrade to a depression came before it hit Oahu.

Flossie made its mark on the Hawaiian Islands with widespread thunder and lightning as well as heavy rain and winds that knocked out power to about 6,500 people residing on the islands. At one point, rain fell at rates of 4 inches per hour, and residents in low-lying area were recommended to move to higher ground right away.

The storm caused flights to be cancelled and outages that resulted in disruptions in the water service for some areas. Fortunately, though, there were no reports of deaths or major injuries.