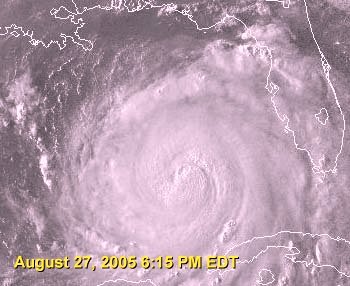 Hurricane Katrina is the costliest natural disaster in United States history. It began its life as a tropical depression that developed in the warm tropical waters of the Bahamas on August 23, 2005 and soon became a category 1 hurricane on the Safir-Simpson scale, a kind of hurricane category guide. After crossing Florida and leaving moderate damage in its aftermath, hurricane Katrina grew in the Gulf of Mexico to a monstrous category 5 hurricane at its peak.

On Monday, August 29, 2005 hurricane Katrina made landfall as a category 4 storm in Buras-Triumph, Louisiana. The storm then went on to hit Mississippi with 120 mph winds. Hurricane force winds extended 120 miles outside of the center of the hurricane. Hurricane Katrina continued to be a hurricane until it went far inland to Meridia, Mississippi, finally downgrading to a tropical storm. Katrina then moved as a low pressure system all the way up to the North East and Canada.

In Mississippi, Hurricane Katrina made landfall as a category 3 storm and caused a 27 foot storm surge that inundated the coast. The great damage inflicted on the Mississippi coast was due to the fact that the most powerful portion of hurricane Katrina, the front right quadrant passed over the area. The three coastal counties of Mississippi that were affected by the natural disaster were devastated. Hurricane Katrina’s storm surge was the highest recorded in United States history. This wave height is comparable to the Indian Ocean Tsunami of 2004.

In Mobile, Alabama and the Florida panhandle, storm surges of up to 16 feet were recorded, with flood waters reaching the front door of the Mobile courthouse.

Hurricane Katrina’s aftermath left 1,836 individuals dead. That makes it the deadliest hurricane since the Okeechobee, Florida hurricane of 1926. 700 bodies were recovered in New Orleans alone in the days and weeks after the floodwaters subsided, and the storm damage from this natural disaster exceeded $110 billion USD.