Posted by JudyR on September 14, 2013 in Active Storms, Latest News | Comments Off on Ingrid Becomes A Hurricane

Formerly a tropical storm, Ingrid has been upgraded to Category 1 hurricane status late Saturday afternoon, September 14, becoming the second hurricane of the 2013 season.

The storm is currently located 195 miles east of Tuxpan, Mexico, and 275 miles of La Pesca, Mexico. Hurricane Ingrid has reached maximum sustained winds of 75 miles per hour with some additional strengthening expected over the next two days. Ingrid is currently moving north at 7 miles per hour, an increase since its standstill last night, and is predicted to turn toward the northwest throughout Saturday, and then due west on Sunday, September 15.

The Mexican government has altered previously issued tropical storm watches and warnings for the Gulf Coast.

The hurricane warning area can expect hurricane conditions by late Sunday, as Ingrid is predicted to make landfall on Monday, September 16.

Hurricane Ingrid has been forecasted to unload between 10-15 inches of rain on eastern Mexico, with some areas reaching as much as 25 inches, resulting in flash floods and dangerous mud slides. The storm surge brought about by Hurricane Ingrid could raise water levels 2-4 feet above normal tides in the area where Ingrid makes landfall, causing dangerously violent waves. 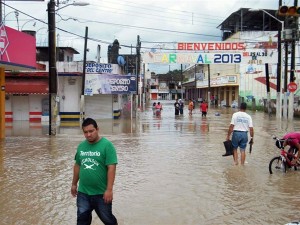 Concerns have been raised over Mexico’s major oil-exporting ports, with only one closed for storm preparation. Veracruz’s emergency services have prepared 12 shelters for storm conditions, providing a safe haven for some 1,000 people. Heavy rains are already drenching the area, causing many homes to flood. Communities and neighborhoods near riverbanks in eight Veracruz townships are being evacuated due to higher than normal water levels. Officials have put this area under orange alert, the highest alert for Veracruz.

Stay updated on the dangerous conditions caused by Hurricane Ingrid at national-hurricane-center.org.