Posted by JudyR on May 30, 2013 in Latest News, Past Storms, Uncategorized | Comments Off on Tropical Storm Barbara 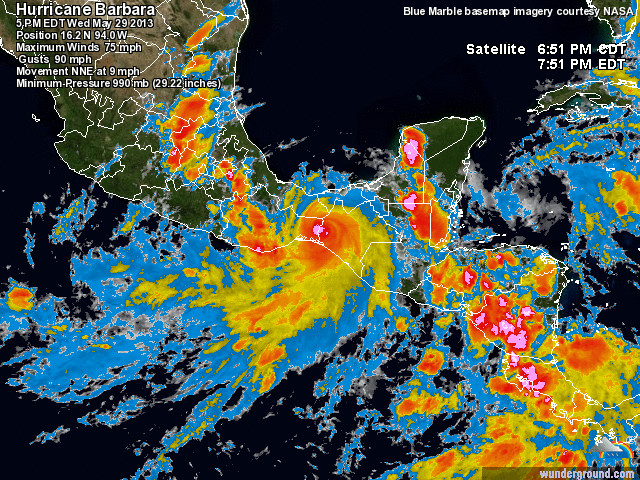 Tropical Storm Barbara picked up momentum late Tuesday and early Wednesday, heading toward a scarcely populated area of Mexico’s southern Pacific coast. Officials in the coastal state of Oaxaca prepped emergency shelters and ended classes early, as a hurricane warning was issued for the Pacific coast from Puerto Angel to Barra de Tonala.

Local ports had been closed near Puerto Angel, Puerto Escondido and Huatulco. Salina Cruz, where Barbara made landfall, is peppered with coastal lagoons and fishing villages. The storm dispersed before reaching the major oil port of Coatzacoalcos.

Some residents received unexpected flooding as early as Wednesday, and flooding within the area still remains a threat.

By last night, the storm had been downgraded to tropical storm status, as it quickly lost strength and power. Winds dropped from 75 mph when it came ashore, to 50 mph as the stormed moved upward and inland. Barbara hit the coast as a Category 1 Hurricane, killing two. An older gentleman surfing at Playa Azul was dragged out by violent waves and killed, another man drown in the city of Pinotepa Nacional while trying to cross over flooding waters.

To the east of Barbara’s landfall, 14 fishermen who went out to sea Wednesday morning from Tapanatepec were reported missing.

Barbara begins the hurricane season a little early than expected. This storm is the 2nd earliest in Mexico’s history and is the first Pacific hurricane to make landfall this far east since 1966.