Posted by LaurenC on June 27, 2013 in Uncategorized | Comments Off on Hurricane Hazards: Triple Threat

Hurricanes cause billions of dollars in damage. But what makes them so destructive and dangerous? Hurricanes devastate coastal regions with their triple threat hazards: storm surges, winds, and precipitation.

Hurricanes menace coastal regions with unfaltering winds. Even the weakest storms, category 1 hurricanes, can tear through cities with sustained wind speeds of a minimum of 74 miles per hour. But higher category storms with powerful winds of up to 155mph or more can topple over trees, powerlines, weak structures, and street signs.

While fallen trees and heavy objects pose a great threat, perhaps the largest concern is projectiles. During a hurricane, winds pick up debris and may cast them through windows and buildings at high speeds. The consequences can be devastating, causing injury, death, or severe damage to belongings.

But that’s not all. Hurricane winds can spawn tornadoes. When a hurricane makes landfall, it generally weakens, and winds towards the bottom of the storm slow down; however, winds towards the top continue spiraling. This difference can create tornadoes, and rip apart homes and buildings of unsuspecting nearby areas. 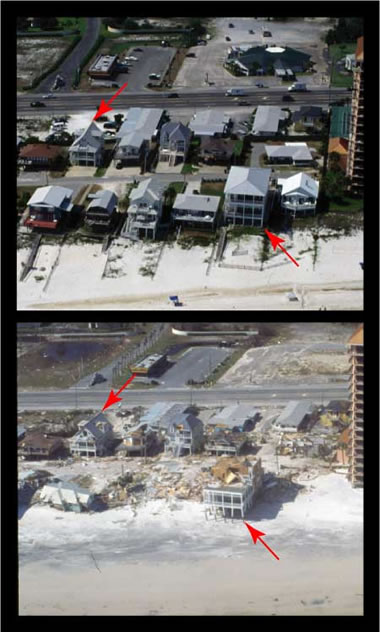 Storm surges form from atmospheric pressure changes which cause a rise in water levels, resulting in the dumping of large amounts of water onto coasts during a hurricane. Storm surges can be 50 to 100 miles long. Storm tides produced by these surges may reach several feet in height before being cast onto shores. A prime example, Katrina, caused a colossal 28 foot storm surge!

Aside from the massive flooding, storm surges can push over buildings, move vehicles, and carry ships, damaging entire coastal regions. This is the biggest threat for persons living immediately along the coast, especially if they are living only 10 feet above sea level.

Not Your Average Precipitation

Rain may not seem like much of a hazard. But, hurricanes can drench any cities in its path with dozens of inches of rain in only a few hours or days. These heavy rains flood homes and roadways, piling large amounts of water onto highways. Flood can even lead to the collapse of structures with their powerful forces and weight.

And while most may be prepared for flooding, many neglect to stay away from flood waters which may be contaminated or filled with dangerous objects. Many accidents occur from motorists attempting to drive through waters which are higher than anticipated.

Be aware of hurricane threats and prepare for storm hazards by reading more at national-hurricane-center.org.