Posted by LaurenC on May 31, 2013 in Uncategorized | Comments Off on Hurricane Formation and Global Warming Meltdown

Hurricane formation relies on oceanic waters of 80°F or above, humid, warm air in surrounding areas, and high wind speeds. While the equation for hurricane formation appears simple, meteorologists claim that the devastation of these natural disasters could be magnified by a single factor: climate change. Since the creation of hurricanes requires warmer temperatures of both waters and air, an increase in the Earth’s temperature accounted for by global warming could be a recipe for disaster. But, could human activity actually impact these natural forces?

The Future of Global Warming 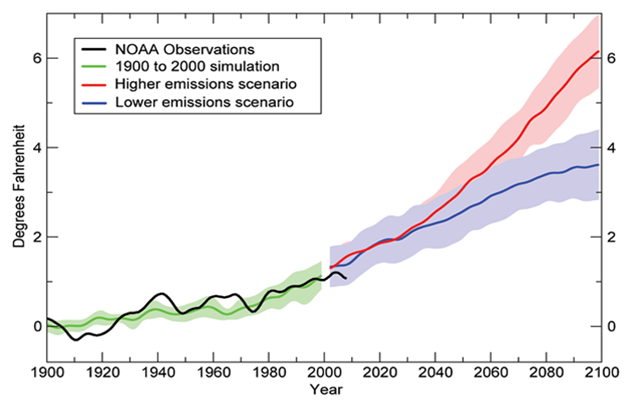 According to NOAA predictions, the Earth’s temperature could rise by as much as 5°F in the next hundred years if humans do not manage their emissions output of greenhouse gases that cause global warming. The best-case scenario, in which humans reduce emission rates, would account for a 3° F increase. Consequently, these changes will induce a warming of sea-surface temperatures that scientists believe is likely to affect hurricane formation overall.

Meteorologist expect global warming to cause the following for future hurricanes:

Perhaps the biggest threat lies in the potential for larger storm surges. Storm surges occur as piles of water that accrue in the center of hurricanes which are expelled onto land. According to data, sea levels have risen by approximately 0.14 inches every year for the past twenty years as a result of melting continental glaciers. This change will leave coastal regions more susceptible to the hurricane-induced flooding related to storm surges. Since the majority of deaths which occur during hurricanes is caused by drowning, this is an extreme threat.

This theory has not reached consensus among scientists. While the facts may point to the notion that future hurricanes will be much more dangerous, other theories detest this logic. The main flaw in the equation seems to be wind shear, or a change in wind speed or direction. Scientists hypothesize that as hurricanes reach warmer waters and form larger, more powerful storms, wind shear could dampen the force. Research suggests that with an increase in temperature, there will be greater wind shear to offset the strength of the hurricanes.

However, the theory remains ambiguous due to a lack of long-term data. Analysts predict that with the advancement of data-gathering devices for hurricanes, the possible correlation of global warming and hurricane formation will be made certain within the next century. Only time will reveal the true threat of hurricanes in the future.